In light of COVID-19, we have updated our policies. Please click here to learn more. 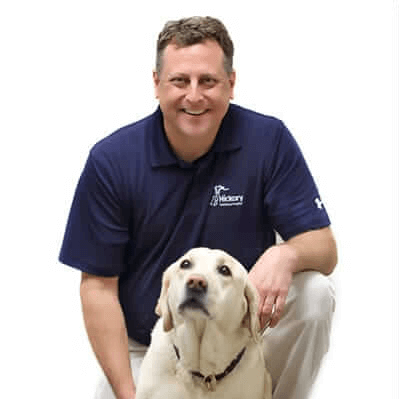 Robert (Bob) Silcox graduated in 1992 from Virginia Tech with a Bachelor of Science degree in biology and chemistry. He then graduated from Ross University School of Veterinary Medicine in 1998.  Dr. Silcox spent his clinical year at the University of Missouri from 1997 to 1998 and passed the Education Council for Foreign Veterinary Graduates exam in 2000.

Dr. Silcox initially worked in Small Animal General Practice at Clark Animal Care Center in Penfield, NY from 1998 to 2001.  He then relocated back to his childhood home in Bel Air, MD and became an Associate Doctor at Harford Emergency Veterinary Services from 2001-2005.

Dr. Silcox and a team of four other doctors purchased their own practice, Hickory Veterinary Hospital, in 2004.  Dr. Silcox became Chief of Staff of Hickory Veterinary Hospital in 2005 and has maintained that position to this day.  In 2008, he and his team undertook a major renovation of the hospital, converting the former pet and feed store into what is now the hospital.

Dr. Silcox has served on the Maryland Veterinary Medical Association (MDVMA) Board since 2011 in various capacities as committee chair, alternate county delegate, and three years on the Executive Board as the President-elect (2014-2015), President (2015-2016), and Immediate Past President (2016-2017).  Dr. Silcox continues to serve on the MDVMA Executive Board as a Director at Large.

In 2014, Dr. Silcox was asked to become a Trustee of the Maryland Veterinary Foundation, which distributes several scholarships to veterinary students from Maryland to help offset the cost of veterinary college.  He has served as a Trustee for seven years and continues to serve on the Foundation.

In 2012, Dr. Silcox began mentoring veterinary students at the Virginia-Maryland College of Veterinary Medicine, located at Virginia Tech. One of his many passions, Dr. Silcox enjoys traveling to the College’s annual Mentor Weekend and takes every opportunity to engage prospective doctors.  Dr. Silcox was extremely honored to administer the veterinary oath to the newly graduated veterinarians on May 13, 2016.

After purchasing Hickory Veterinarian Hospital in 2004, Dr. Silcox began to pursue one of his passions of mentoring high school students interested in becoming veterinarians. He has been privileged to be the mentor to dozens of high school students from four area high schools, including those who attend the Natural Resources and Agricultural Science Magnet Program at North Harford High School.

Most recently, Dr. Silcox received a lifetime achievement award in July of 2021. This honor is awarded to a Maryland veterinarian for demonstrating a lifetime of significant contribution and selfless dedication to veterinary medicine. His exemplary work in the community & compassion for the health and welfare of animals has made this award well-earned. Dr. Silcox is honored and humbled.

Dr. Silcox enjoys surgery, wellness care, and educating his clients about veterinary medicine. Dr. Silcox is an avid Orioles, Ravens and Hokies fan, plays volleyball, and enjoys spending time with his wife, Pam, and two children, Hannah and Ben. Dr. Silcox has a cat, JD, and a dog, Rudi, who has come to work with him every day for the past 13 years.